The Tolbooth is the town centre’s most noticeable landmark standing prominently on the high street with its distinctive cupola rising above the skyline.

There has been a building of some prominence on this site for around 800 years. The current tolbooth was built in 1838 and now houses an impressive courtroom, chambers and prison cells. Inside there are a number of paintings and records of the town burgesses.

The Forres Heritage Trust took over the running of it from Moray Council in 2014.

Records only date back to 1619, as the town was sacked and burned 1390 by the Wolf of Badenoch.

Much of the early history is extracted from The Annals of Forres written in 1934 by Robert Douglas. 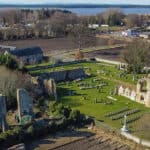