The area is very popular for cycling as there are many routes on- and off-road all year from early spring right through to late autumn being the best time, the summer months with its long days allows you to cycle well into the evening hours.

Many of the quiet back roads offer spectacular scenery for cycling and it is common to have the road to yourself. There are also miles of pathways throughout the area marked for walking but equally suited to cycling.

Here are some of the best spots.

The Culbin Forest stretches along the coast from Findhorn Bay to Nairn, providing miles and miles of cycle tracks to explore on your bike.

It’s within cycling distance of Forres and has waymarked routes. However, there are lots of tracks and you can pick up a map and make your own.

It’s also worth noting that Culbin is an RSPB reserve and if you are interested in birdwatching, this is a great place to spend some time

You can cycle from Forres to Findhorn on a dedicated cycle path, the path is at the side of the main road so while it is not the most scenic it does make it much safer than riding on the road. It starts at Sueno’s Stone at ends in the village of Findhorn. Once at Findhorn, you can ride along the sand to Burghead, tide-permitting.

You can also ride inland through the Roseisle Forest to Burghead. Again, there are lots of routes to explore and there’s a nice barbecue and play area, we well as a toilet block.

The Dava Way is a marked walking trail going from Forres to Grantown-on-Spey following mostly what was the old Highland Railway Line, the trail is about 22 miles long and is suitable for reasonably experienced mountain biking.

For further details on routes, see:

There are several places to enjoy a bit of retail therapy, the high street having 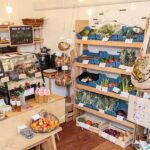