The River Findhorn flows right through the Forres area, emptying out into Findhorn Bay.

As its descends from the Monadhliath mountains it is a fast-flowing river, twisting and winding through narrows and gorges. Not only is this a great fishing river, it offers one of the best white water rafting experiences in the country.

“The river needs special tactics, such as stealth and agility to be successful on some of the beats.

“Smaller rods and more trout type tactics are often used to great success in catching salmon. Out of the gorge the river offers more of a traditional type of fishing.

“With the catchment being smaller than that of the Spey, the river does run low in river height quite quickly and benefits hugely from rain showers and a good ‘spate’.

See the Fishpal website for more information and to buy permits

Local fishing guide Ian Neale, also waxes lyrical about the River Findhorn. His website Speycaster.net, says it traverses some of the most magnificent scenery Scotland has to offer.

“This is spectacular water, showing a series of runs, pots and substantial holding pools nestling below the high cliffs and granite outcrops supporting Scots Pine, Alder and Birch.

He adds that the angler “must be able to Speycast to make the best of this fishing.”

The beats on Glenferness include Altnahara, Mini-Daltra, Daltra, Levrattich, and Church. All of these two-rod beats are very generous in length offering high and low water pools and streams for summer grilse fishing.

The river descends further into Coulmony, Dunphail and Logie Estate beats before going through the Poolie Falls at Sluie and into the lower gorge at Darnaway.

Ian says: “The Spring fishing can be excellent here, as the early fish in March to April can be held back by the torrents of snow meltwater from upstream.

“Below Sluie is Altyre Estate with over two and a half miles of picturesque salmon fishing meandering through high sandstone cliffs. Below here are some four miles of excellent double bank Association day and season ticket water at Forres, taking us down to the brackish waters of the Sea Pool and the estuary into Findhorn Bay.”

There’s more on fishing the River Findhorn at 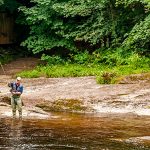