On the trail of a monster

Inverness is the so-called capital of the Highlands. It’s the largest town, in fact now a city, in the Highlands, the administrative centre of the county, and home of the farthest north premier league football club.

It’s also a convenient hub for travellers, it’s a crossroads for transport where routes lead out to the north, east, west and south.

If you head north or west, you’ll be on the North Coast 500 and deep into the true Highlands of Scotland, where sheep outnumber humans, and landscapes are mountainous and majestic.

To the south, you’ve got Aviemore and the Cairngorms on one route and Loch Ness and the Great Glen on another. Both equally spectacular.

Last, but definitely not least, you’ve got Moray and Nairn to the east. Head out on the A96 and you’ve got world-class coastline, Malt Whisky country, the North-east 250, Snow Roads, Speyside Way and Dava Way – just too much to list. Take a look for yourself.

Nairn is a lively Highland town within easy reach of Forres. Just take the main road west towards Inverness and it lies on the A96 about 10 miles away...
Read more

Inverness is often known as the 'Highland Capital because it is the largest settlement in the sprawling county. It became a city in 2000 and more rece...
Read more

Loch Ness is famous the world over. In fact, it is probably more famous than Scotland itself. People come from all over the world in the hope of a cha...
Read more 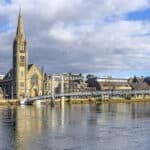