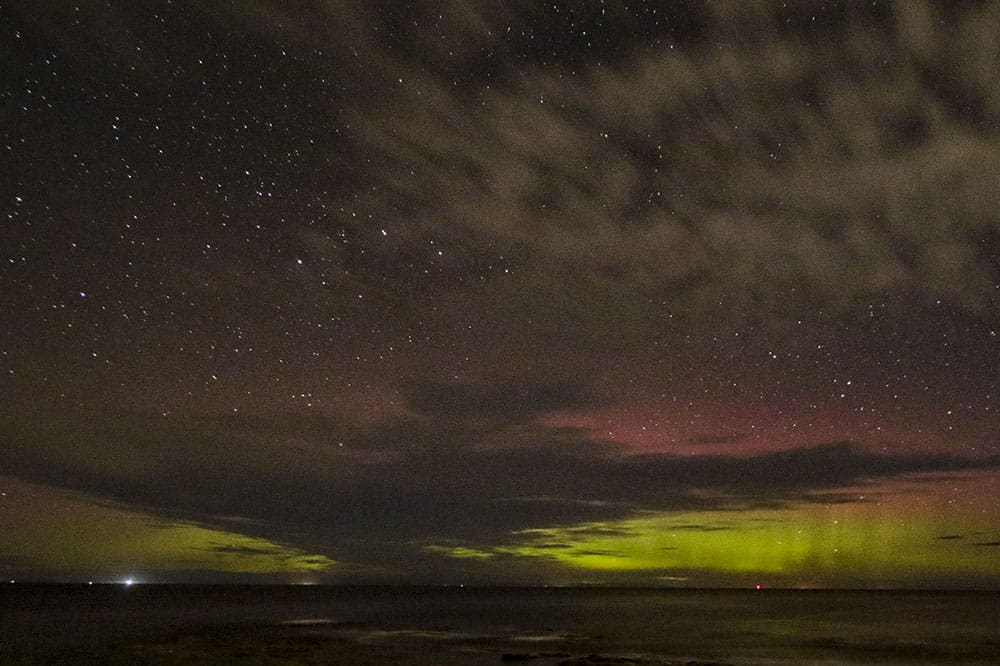 As October begins, it’s starting to get a little colder, especially in the evening. Days are getting shorter, and as most people are at home watching Netflix or tucked up in bed, for some of us, the dark skies of Forres and the Moray Coast are beckoning.

Shorter days mean longer nights, so for those interested in the night sky, autumn and winter are every bit as good as summer and spring.

On the last night of September, I was pinged by the app. No, not that one, the Aurora app – minor geomagnetic activity. You have a vague chance of seeing the aurora tonight.

I’m not really an aurora chaser, but since the prospect of going into October is a bit like going through the wardrobe into Narnia, I ventured out to see what the night sky had to offer before frostbite was a real reason to stay at home. It was remarkably warm.

Aurorae are fickle beasts, and apps are their saviour. Imagine before these apps, sightings of the Northern Lights were quite rare and photographed only in the Arctic extremes. But now, thanks to Aurora Watch and the wonders of Facebook, you’ve got a lot more chance of witnessing the weather phenomenon.

To be honest, by the time I got there, there wasn’t much to see, I had missed the best of it, but it wasn’t as cold as it looked and I sat in my car soaking up the sounds of the lapping sea at a rocky outcrop on the Moray Firth near Burghead. A shooting star zipped across the sky urging me to get out and I complied.

I took a few pictures but the exposure settings were making it clear this wasn’t going to be the firth’s brightest display.

Thirty seconds at f4 and still pretty dim, so I ramped the ISO up to 5000, and got something vaguely resembling what I saw with my own eyes. I’ve brightened it up to show the rippling effect and the purple glow, at the risk of being tracked down by the saturation police. It’s not the best Aurora pic, but it’s not the worst either – and I think i’ll be spared an arrest for this level of colour intensity.

I waited about thirty minutes for this, but as I wishfully hoped it would get better, I turned my attention to what was behind me.

It was very dark, and even after half an hour, it was difficult to see what was in front of me, although I knew it was a rocky shoreline that I didn’t fancy dropping into. The spot had also become a ‘dark skies pop-up village’ with about 10-15 skywatchers and campers who had presumably also been pinged.

Anyway, in the dim semi-distance, I could make out the shape of the Burghead Visitor Centre peering over the top of the hill above me. The grassy bank that leads up to it from the shore was black, and the sky was mostly cloud-free and beautifully perforated with a blanket of stars.

There was a small camper parked right in the picture, and while I could easily have moved left or right to get it out of shot, I knew I’d be risking my life, or at least my anklebones to do it. And it added to my composition, so I left it in.

There were about 10 campers parked up in this spot, and I could have easily spent all night there myself. It’s a beautiful spot to linger. Even without an aurora, the distant pin-pricks of light from Ross-shire and Sutherland shores, the pulsing Tarbet Ness lighthouse, and the sea crashing against the rocks, all make it a peaceful place despite the transient residents.

Moray has the most northerly dark sky park in the world, at Tomintoul, but really, you don’t need to travel deep into the Cairngorms to get your night sky fix. It’s right here on our doorstep.

This was my first time at this spot, but I’ll definitely be back. 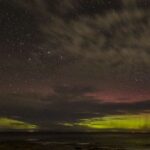