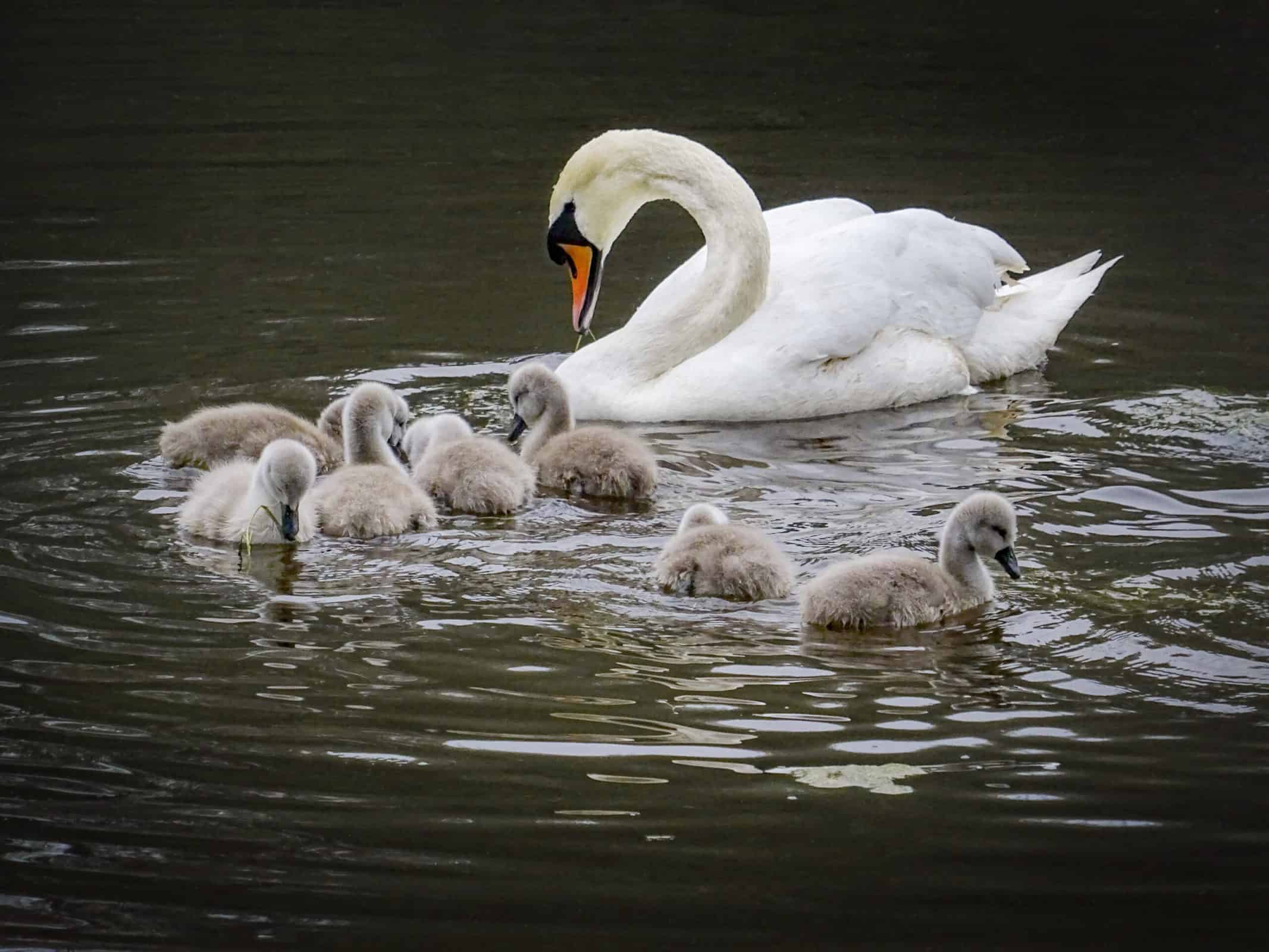 Walking around any of our local ponds and lochs, such as Loch of Blairs, Sanquhar Pond Burgie Arboretum or the pond at Brodie you cannot fail to notice the Swans, especially at this time of year when the Cygnets are newly hatched and looking so cute in their brown fluffy feathers!

Mute Swans are a common bird in the area and one that most people will recognise, we do get other types that visit us mainly in the winter, the Whooper and Bewicks Swan, but the ones that stay with us all summer are the Mute.

The male (called a cob) and the female (a pen) can be told apart by looking at their bills, the male has a large black knob at the base of the bill whilst the female does not, the male is marginally larger as well.

Getting ready for the cygnets

In late March and April both birds build a large nest, the male brings in the materials and the female constructs the masterpiece, she will then lay between 5 and 7 eggs.  Both birds then take turn incubating them for 35-42 days until they hatch.

The chicks remain in the nest for 24hrs to dry out their feathers and make them waterproof, then after that, they take to the water!

The family group will stay together for 6 to 10 months until the young birds start showing a lot of white feathers in their plumage, at this stage the parent birds will attack the youngsters and force them to move onto pastures new and make their own way in the world.

The myths, legends and the truths

Swans are fairly long lived birds with the average wild bird living from seven to eight years, however birds kept in a collection have been known to survive to the ripe old age of 30 years.

One fact that is widely published is that Mute Swans pair for life, which is broadly true. The bond is extremely strong and most birds will spend their lives together, usually very close to where they were hatched. However some birds do “divorce” their partners, usually when a more dominant male arrives in the area and tempts the female away from her current partner, and if one of the pair dies the surviving bird will take a new mate.

Contrary to their name they are not mute and when you are near to them you will hear quite a wide range of grunts, wheezes and hisses especially when they are feeding or they deem you are too close to their chicks, the myth that they only sing beautifully once in their life and that is when they are close to death is just that – a myth, but it did give rise to the term “Swan Song” where someone or something bows out with a final grand flourish.

Another well-known statement is that the Queen owns all the Swans in the UK, now this has some truth (although how much is truth or how much is ceremonial we cannot be certain). In the “days of olde” Mute Swans were a highly prized food source, and as such were very well protected.

Historically Swans can only be owned by three other organisations or people, they are Abbotsbury Swannery, The Vintners and the Dyers, these institutes would catch Swans and put their own unique marks on the birds’ bills any birds that are not marked are then deemed the property of the Crown. There is seemingly still a position in the Royal workforce of “The Queens Swan Marker” who will monitor the welfare of all the Swans near to Royal Residences.

Probably the most widely rumoured and well know myth is that a Swan can break your arm with its wings, this is totally untrue.

Birds’ bones as designed to be very light, and have a honeycombed internal structure, so if a bird was to hit a human bone, the chances are the bird bones will break and shatter first.

I would however treat any Swan with respect and view from a safe distance and most definitely keep dogs on leads, they are a big bird and will defend there young with physical force.

So why not take a visit to one of the locations mentioned at the beginning of this article and enjoy the legendary Mute Swan as it glides effortlessly over the calm waters surface being closely followed by a trail of fluffy cygnets. 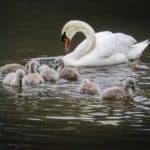