This “model village” was built in 1775 by Alexander Gordon the 4th Duke of Gordon, 20 years after the military road by William Caulfeild appeared – now the A939.

Although Gordon encouraged the production of linen, the locals stuck to agriculture, growing vegetables and raising cattle.

Tomintoul is built on a grid pattern with a long high street and central square. The idea of having a village here was to discourage the illicit stills. It’s often referred to as the highest village in the Scottish Highlands, which incidentally include Moray!

Estimates suggest that in the early 1700s there had been up to 200 illicit stills in the Livet glen, with spirits smuggled out over the Ladder hills. In 1820, some 14,000 illegal stills were confiscated annually in the Livet glen area.

One of the first legal distilleries set up was a small operation in 1824 which eventually became The Glenlivet distillery, eight miles to the north and now known all over the world.

Things to see and do in or near Tomintoul

Don’t miss ‘The Still’ art Installation, perched on the hillside to the north of the village. A mirrored cube that reflects the vast landscape around you when you stand inside it.

With striking views over the River Avon, this simple space is a perfect stopping point to stand and ‘reflect’.

A purpose-built network of mountain bike trails can be found on the Glenlivet Estate.

With trails for beginners and experienced riders, a cafe, pump track, skills area, ample parking and rewarding scenery, this is, in the words of a visitor, the best free ride trail in Scotland.

Directions: Take the A939 north out of Tomintoul. After a couple of miles, turn right onto the B9136, just before crossing the River Avon. After another two miles, turn right onto an unclassified road and follow the signposts to Glenlivet Bike Trails. Also can be accessed from Grantown and Ballindalloch direction.

Open 10 to 4pm. There is a small fee to park, but all proceeds go towards trail development and maintenance.

Find out more at Cycle Grampian.

Tomintoul is inside the farthest north Dark Sky Park. This means that it is one of the best places to view the night sky. This is due to the low occurrence of light pollution. About a mile from the village, Tomintoul is one of the remotest places, hence the prevalence of illicit stills as mentioned earlier!

The village has also had special lighting installed which minimises the pollution coming from them. See more on our dark skies page.

W: https://www.tomintoulandglenlivet.com/
Note: All images and text on this site are protected by copyright and should not be copied or reproduced without written consent.

Rather than give you a fixed trip itinerary, here you’ll find details of nearby attractions and links (tags) to help you find activities similar to those at this location. Use this information to help you plan your stay without missing a thing.
Balmoral Castle and estate
Explore the grounds of the Queen's Scottish home 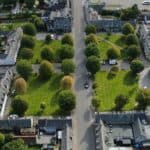