The magnificent view of this castle appears over the horizon if you’re driving south. Its isolation in the glen makes this medieval house a spectacle in the landscape.

On closer inspection, the surrounding wall is built in the shape of a star, and was added when the castle became a military base.

There’s a small car park at the top of the hill looking down over Strathdon. It’s worth a stop to take in the vast landscape.

Corgarff, now managed by Historic Environment Scotland, was originally a noble residence, and became an army base for hunting down Jacobite sympathisers and, later, whisky smugglers.

Open mid-April to the end of September, Tuesday to Saturday.

W: https://www.historicenvironment.scot/visit-a-place/places/corgarff-castle/
Note: All images and text on this site are protected by copyright and should not be copied or reproduced without written consent.

Rather than give you a fixed trip itinerary, here you’ll find details of nearby attractions and links (tags) to help you find activities similar to those at this location. Use this information to help you plan your stay without missing a thing.
Balmoral Castle and estate
Explore the grounds of the Queen's Scottish home 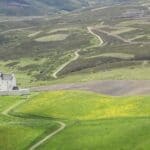