Nairn is a lively Highland town within easy reach of Forres. Just take the main road west towards Inverness and it lies on the A96 about 10 miles away.

It’s outstanding feature is its three beaches which are easy to access and suitable for all. Try some wild swimming, kite surfing, or take a boat to see dolphins and other wildlife.

The large links area between the beach and the town makes for a nice retreat or play area, and has a children’s splashpad, cafe and bandstand. And toilets!

Nairn town centre has a variety of independent shops and is formed around a tolbooth at the centre.

The area that surrounds the harbour is called Fishertown. It’s a tight network of fishermen’s houses, separated by narrow lanes. Each of the houses here have very little in the way of gardens, and it’s quite different from the spacious mansions in other parts of the town.

For the active, Nairn has a leisure centre with swimming pool, playparks, crazy golf, outdoor gym and riverside walks.

Nairn has always been a holiday town and counts Charlie Chaplin among its famous visitors. He spent many holidays here when it was known as the Brighton of the North.

It’s hard to see the comparison, but equally, it’s nothing like other towns along the Moray coast.

The Viewfield Museum contains artefacts of the past, and the town boasts an impressive arts and community centre.

The town sits astride the River Nairn and this flows out past the harbour. It’s a haven for wildlife, and has some pleasant walks that lead from the town along the riverside.

Don’t miss Nairn’s secret beach, it’s wider, longer and smoother than the two in the town, but its not signposted! Take the road out of Nairn towards Inverness, and turn right to go to Ardersier. Then take the first turn on the right and park sensibly at or near the end of the track. Shh! Don’t tell anyone where you got directions!

To the east of Nairn is a natural sand bar that stretches nearly all the way to Findhorn Bay. Beware, it’s a dangerous place to be as the tide can often cut you off. The land here was once a vast dune system. In fact it was Europe’s only desert! The sands were constantly shifting and in a great storm during the late 17th century, they engulfed an entire village. The Forestry Commission planted trees to successfully control the dunes, but the bar of sand remains a magnificent legacy of the shifting sands.

W: http://visitnairn.com
Note: All images and text on this site are protected by copyright and should not be copied or reproduced without written consent. 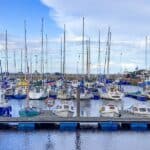