Home of the world-famous monster

Loch Ness is famous the world over. In fact, it is probably more famous than Scotland itself.

People come from all over the world in the hope of a chance sighting of the elusive Loch Ness Monster. The loch has maintained this legend in its depths for more than 1500 years.

But it’s not just the monster that captivates people who visit here, it has a mystery of its own. The longest stretch of fresh water in the country and filling most of the geological feature known as the Great Glen fault.

The Great Glen splits Scotland east to west from Inverness to Fort William, connected only briefly by land between Lochs Ness, Oich and Lochy, all connected by the Caledonian Canal.

There are scattered villages around the loch, with the main one being Drumnadrochit on the western shore. Further down the loch is Invermoriston and on the eastern side is Foyers. Right at the southern tip you’ll find Fort Augustus with a staircase of canal locks.

At Drumnadrochit are the ruins of Urquhart Castle, Scotland’s second busiest tourist attraction after Edinburgh Castle, and a popular place for Nessie hunters.

Monster spotters pitch up along the shoreline wherever they feel inspired to do so, but one determined hunter pulled up in his camper van one day and never left. He made it his life-long ambition to keep watch on the loch for the monster and has lived in his van in the same spot for some 20 years.

W: https://www.visitinvernesslochness.com/
Note: All images and text on this site are protected by copyright and should not be copied or reproduced without written consent. 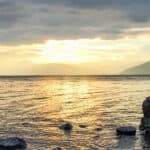