Don't miss the 'capital' of the Highlands

Inverness is often known as the ‘Highland Capital because it is the largest settlement in the sprawling county.

It became a city in 2000 and more recently gained another tag as the gateway to the North Coast 500.

As a city it’s not big, especially if you’re walking. Most of the interest is focussed in the centre, where you’ll find the River Ness, Inverness Castle, a pleasant high street and a Victorian market.

There are plenty of places to eat and the museum is worth a visit, not least because it also contains an art gallery in the same building.

You’ll certainly be drawn to the riverside, with some nice panormaic views of houses houses, shops and churches that make up the facade of this city.

The castle dominates the skyline from most of the riverside, whichever way you walk. Until recently, it housed the courthouse, so only the (allegedly) nefarious got to see the inside, unless of course you worked there!

However, this will all change soon, a new courthouse has been built and the castle is quite rightly being turned into a visitor attraction.

From the castle you can walk along the river to Ness islands – two rafts of land that split the watercourse into fast-flowing eddies.

On the north riverbank is Inverness Cathedral and Eden Court, a theatre, arts and etertainment venue, as well as the Highland Archive Centre where you can research your family tree.

There’s also a skate park and mini-golf course along here. The islands are a peaceful rural place to get away from the hustle and bustle of the city, though they do get busy on summery days. It’s a nice place for families, with a snack bar, benches and further attractions not far away, such as the spacious Whin Park, with play equipment, a boating lake and a mini railway.

Keen wildlife spotters may see otters, seals and deer, in the quieter spots along the bank.

Moving away from the River Ness, the Botanic Gardens are set within a former walled garden, and features a glass house with plants from tropical rainforests and dry locations around the world. Don’t miss the Cactus House, and best of all it’s free to enter (donations welcome), and there’s a cafe, outdoor seating and you can buy plants from the shop.

Not far from here, boat trips run along the Caledonian Canal and into Loch Ness. Or if you’d rather spot dolphins, head for the marina at the other side of town and take a trip into the Moray Firth.

A few miles from Inverness is the site of the last battle on British soil, the Battle of Culloden took place on 16 April 1746, and the Jacobites suffered heavy losses against the government forces. The visitor centre at the site is a worthwhile visit, with large parts of battlefield open to walk around and a large indoor centre.

Things you can do on a day trip to the city

W: https://www.visitinvernesslochness.com/
Note: All images and text on this site are protected by copyright and should not be copied or reproduced without written consent. 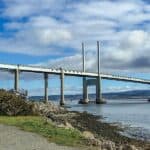