We’re very aware of seasonal changes on the ground, but perhaps less so in the night sky.

Milky Way season is March to October, while aurora season is August to April, so there’s a crossover point when you get the best of both worlds, a magnificent aurora and a stonking view of the Milky Way. Saturday 30 October was one of those days. 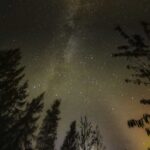