The Moray Coast Trail is a stunning 50-mile walk along one of the most beautiful coastlines in the world… and it starts in Forres!

With breathtaking views over the Moray Firth, rugged cliffs, hidden coves and the most deserted wide sandy beaches, it wends its way from Forres to Cullen and is well signposted.

You can walk the whole trail in three to four days exploring historical fishing villages and towns. Keep your eyes peeled for our famous resident bottlenose dolphins and other wildlife along the way.

Starting at Forres, it’s not long before you reach the coast. The path wraps around the eastern shoreline of Findhorn Bay on its way to the village of the same name.

Although you’re only skirting the bay, it’s a nature reserve, so you’ll be able to see a variety of birds and during the summer months, osprey come here to fish too. At dusk and dawn you can also spot otters dipping and diving in the shallow waters of the bay.

You’ll pass the Findhorn Foundation, most famous for its ecological community.

If you’re staying in Findhorn, it makes sense to start here. There are plenty of B&Bs as well as two camping and caravan sites. There are also several places to eat.

After Findhorn, the trail leads through the Roseisle Forest. There’s nothing to say you have to stick to the path, and the six mile stretch of perfect beach between these two points means you can switch in and out of the forest as you please and walk on the beach if you prefer.

Deep within the Roseisle forest there’s a large parking area with playpark, toilets, and seasonal food trailer. It’s a popular spot for locals and visitors, horse, riders, dog walkers and anyone who wants to soak up the beauty of this serene place.

Continuing, the next stop is Burghead, a quaint and busy harbour. The town is mainly built on a peninsula that projects into the Moray Firth, meaning that most of the town has sea on three sides. It was once the site of a large Pictish fort which occupied the bulk of the headland.

The harbour has a wide sweeping sandy beach that stretches miles back around Burghead bay to Findhorn. There is a caravan park right on the coastal trail as you go into Burghead. See more at burghead.com

When you leave Burghead the terrain changes, the wide-sweeping sands are replaced with cliffs, coves and caves. You’re walking along a cliff-top and you can see the swirling sea below.

The next village stop is Hopeman, founded at the beginning of the nineteenth century as a fishing port. A harbour was built and it was expanded in 1838 for the export of stone from nearby quarries.

Hopeman has two large beaches split by a man-made harbour. The beach is popular for surfers as it often gets large waves. Remember that the Moray Firth is just an extension of the North Sea!

Hopeman’s colourful beach huts are something of a novelty, especially for the area. Beach huts are popular at resorts further south, and until recently, this was the only beach for hundreds of miles where you’ll find these quaint wooden shelters. In recent years, there have been several new ones built on the beach at Findhorn.

Hopeman’s main street has a few local shops including a post office, chippy, general store, gift shop and an ice cream shop. There is a caravan site and golf course nearby.

Between Hopeman and Lossiemouth, you get more cliffs, coves and caves, and more chances to scramble down and explore. The caves have turned up some curious fragments of history, including human remains!

Lossiemouth is often referred to as the ‘Jewel of the North’ – it has two large sandy beaches, a marina from where you take wildlife tours, weather permitting. But perhaps the most impressive sight in the town is the pretty sand dunes that separate the sea from the outgoing river. It has to be seen to be believed.

The River Lossie empties into the Moray Firth here and the area surrounding it is full of wildlife and a haven for bird spotting.

It’s also home to RAF Lossiemouth, the most northerly RAF base in the UK.

In the town, you’ll find a championship golf course, swimming pool, play park, cycle paths, cafes, restaurants, and not to mention Covesea Lighthouse which has been converted into holiday accommodation.

There are also two caravan parks , both close to the beach.

From Lossiemouth to Spey Bay, the track goes back into woodland and the sandy beaches switch to shingle as it approaches Spey Bay. This where the delta-like mouth of the River Spey meets the sea.

This is another haven for wildlife and on the other side of the Spey is the perfect place to spend a day spotting dolphins, whales, seabirds and all manner of wildlife.

It’s the headquarters of the Whale and Dolphin Conservation Society and one of the best places to spot them in the UK. Don’t miss the daily chalkboard with details of all the sightings.

To get to this side, the trail takes you over the disused railway bridge that once carried the Moray Coast Railway between Elgin and Portsoy. If you don’t allow yourself to deviate from the trail, you’ll miss gems like this. It’s not far. Once you’ve crossed the bridge, turn left and follow the riverbank to the Tugnet Ice House. This is once the largest ice house in the country, now forming part of the dolphin centre and houses a museum detailing some of its history.

To get back to the path, retrace your steps, or alternatively, walk along the shore to the golf course and take the road through Kingsteps and back out to where you’ll pick up the path and head eastwards on your journey

Portgordon is a small former fishing village that centres around its harbour. No fishing activities happen here any more and there is a focus on developing the harbour as a marina. There’s only a single shop and a post office, however there is a vibrant gala in the summer, mainly focused around the harbour.

The harbour here, although now quiet, was once the most important in the region. It’s large three-acre basin had 100 boats registered in 1800. This declined when Buckie and Banff grew to dominate the area, and the harbour is now largely redundant

Leaving Portgordon, the trail continues along the old railway through Buckpool and into Buckie.

Buckie is the third largest town in Moray after Elgin and Forres, but it’s very different to both. It has an extensive harbour, and as it’s built up along the coast, it has merged with smaller villages such as Buckpool to the west and Portessie to the east.

The Moray Coast Trail goes in one end and out the other, so leave generous time for your stop if you want to explore, and because it’s linear, it’s still easy to make your way from end to end without much deviation from the route.

Buckie still has some fishing activity. The harbour is home to a fish market, and you can see working fishing boats in the basins. Walk towards the town centre and you’ll find a decent-sized high sreet with places to eat and shop.

The path out of Buckie follows a line along the clifftop and you’ll get good views of the rugged coast as you head towards Findochty.

Before you arrive in Findochty, make a note of its pronunciation, it is said ‘Finechty’. It’s a lovely coastal village with a harbour that has been transformed into a bright and colourful marina. The gently-sloping flanks of terraced houses have made it a picturesque scene, with many residents adopting bright colours for their outer walls and a very distinctive white flashing that highlights the local architectural style.

The steep slopes of Portknockie have prevented housing developments on the banks of the harbour, it’s almost like a cove. But the harbour has an interesting feature, a tidal paddling pool! The inner basin has a small number of leisure boats, but the most impressive feature of Portnockie is a short walk from here.

Bow Fiddle Rock is a coastal archway formed by millions of years of erosion and perfectly viewed from the shore opposite. You can view it from the roadside, but you’ll get the best angle by scrambling down the hill to see it from the water’s edge.

At Cullen the pathway ends (or starts in your going east to west) but it does so on a high.

The last few steps of your walk follows the old railway as it curves into the town over the Cullen viaduct. You’ll get magnificent views of the village, the shore and beach from this elevated viewpoint.

Local buses serve all the villages along the trail, Forres has a bus to Findhorn. All the other villages are served by busses from Elgin. You can find timetables from 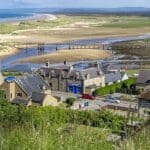