The irony of a town with no gardens

This seaside harbour village is larger than it’s neighbours Crovie and Pennan, but in many ways, it is more condensed than both. The sloping, winding road road down into the village has a character all of its own and by the time it gets to the shore, it is just a ledge with no barrier or kerb, and if the turning area at the end is full of residents’ cars, wipe your rear window and wing mirrors… you’re going to need them!

Gardenstown was founded in 1720 by Alexander Garden as a fishing village. It has has developed over the years by building backwards from the seafront, creating tiered layers of properties. They’re so tightly packed here that very few have gardens. Quite ironic considering its name.

This layout of houses built end-on to the sea with very little outside space is typical of many villages and towns along this coast.

It’s a beautiful bay and harbour, and views from the clifftop and at sea level are remarkable. It’s a nice place to walk around and relax at the harbour.

The reasonably-sized harbour was once filled with fishing boats. There’s still a few creelers there today, but it’s mostly pleasure craft – a sign of the dwindling fishing industry seen all along the Moray Firth coast.

At the east end of the village, you’ll find a makeshift industrial estate and plenty of parking space. From here, you can walk a narrow path along the craggy coast to Crovie.

If you look to the west, you’ll see a ruined church on the hillside. St John’s Kirk perches almost precariously on the edge of a cliff. It used to be known as the ‘kirk of sculls’ after the human skulls which were preserved in the wall next to the pulpit. The story goes that Danish invaders settled below the cliff. Scots rolled down huge boulders and the invaders decamped, later to be besieged and beheaded.

You can drive to the church from a narrow track outside the village, or climb the steep hill on foot from the beach.

Either way, you will be rewarded with magnificent views over the village and harbour.

W: https://www.discovergardenstown.co.uk/
Note: All images and text on this site are protected by copyright and should not be copied or reproduced without written consent.

Rather than give you a fixed trip itinerary, here you’ll find details of nearby attractions and links (tags) to help you find activities similar to those at this location. Use this information to help you plan your stay without missing a thing.
New Aberdour Beach
Limestone arches, healing well, coves and caves 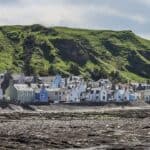