Little village is big on whisky

Craigellachie is a small village situated where the River Spey and River Fiddich meet.

The two rivers are synonymous with Speyside whisky production, as is the village itself, being dominated by the imposing Craigellachie Distillery, and just outside the village, the equally imposing home of the Macallan.

Further emphasising the focus on whisky is the nearby Speyside Cooperage, where thousands of barrels are made for storing the amber nectar.

It’s just off the main road between Rothes and Aberlour, and if this is your approach route, you can’t help but notice the picturesque bridge over the Spey.

Designed by Thomas Telford, it was built between 1812 and 1814, from iron, and spanning between impressive, castellated masonry towers on both banks.

The iron parts were cast in Wales, then shipped by sea to the mouth of the Spey and transported to the site.

The village dates back to 1750, and before the bridge was built, there was a ferry at roughly the same spot.

The bridge has been bypassed by the A941, however, it makes an interesting stop to view this amazing piece of civil engineering.

Craigellachie was once served by a railway, and remnants of this can be seen where the Speyside Way passes through the village.

Rather than give you a fixed trip itinerary, here you’ll find details of nearby attractions and links (tags) to help you find activities similar to those at this location. Use this information to help you plan your stay without missing a thing.
Aberlour
The home of shortbread... and more

33 miles from Forres
More info about Ben Rinnes
Dufftown
The malt whisky capital of the world! 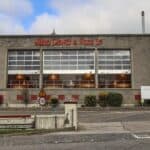