Eclectic events offer an unusual mix in this small village

A large adventure park and two unusual events draw thousands of people every year to this tiny village at the gateway to the Cairngorms.

Landmark Forest Adventure Park is a family favourite for miles around with acres of woodland walks, climbing wall, treetop trail, mazes and flumes. It is set in an ancient pine forest.

The village is also home to the World Porridge Championships and Carve Carrbridge, an international festival of chainsaw artistry.

But the real historical landmark is its old packhorse bridge, a stone structure spanning the River Dulnain.

It was built in 1717 and the oldest stone bridge in the Highlands, almost defying gravity with its self-supporting arch, keeping it in place. It was damaged by a flood in 1829, but still holds on.

In the World Porridge Making Championships, competitors battle it out for the title and ownership of the ‘Golden Spurtle’, a spurtle being the blunt stirring utensil of porridge-making.

Carrbridge also has a golf course.

Make a note of these dates for your diary

W: https://carrbridge.com
Note: All images and text on this site are protected by copyright and should not be copied or reproduced without written consent.

Rather than give you a fixed trip itinerary, here you’ll find details of nearby attractions and links (tags) to help you find activities similar to those at this location. Use this information to help you plan your stay without missing a thing.
Aviemore
All-year-round resort filled with fun activities

37.5 miles from Forres
More info about Rothiemurchus Centre
The Dava Way
Walk along the route of the old railway to Grantown 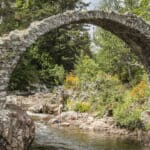