This interesting little building is one of many doocots dotted all over Scotland.

Doocot is the Scots word for dovecot, which is a small building for pigeons or doves (doos).

This one at Auldearn (9 miles from Forres is in very good condition and stands on a circular mound of land called a motte where there was once a castle.

The mound oveflooks the plains between it and Garlic Hill, where the Battle of Auldearn was fought in May 1645. Here an army of 2,000 foot soldiers and 250 horsemen under the Marquis of Montrose, for the king, defeated a Covenanter force of about 4,000 foot and 400 horse led by General Sir John Hurry.

The doocot stands is 7.5m tall and comtains 515 nesting boxes. 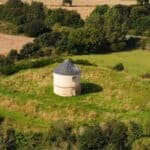