Sitting deep within the Glenmore Forest in the Cairngorms National Park is this little gem, The Green Loch – so-called due to its unusually deep and vivid turquoise colour.

Most maps and information boards use the Gaelic name ‘An Lochan Uaine’ which translates literally as the Green Lochan, but more commonly referred to locally as the ‘green loch’.

It is thought the green comes partly from algae in the water. It appears to be a bowl where water has collected rather than having a stream in and out. Some think the colour comes from a reflection of the trees on the opposite bank, although as you will see from the pictures, they’re not exactly abundant, nor are they the same shade of green.

The legend is that it is green because the pixies washed their clothes in it. You can make your own mind up on that one.

It’s a 45-minute walk through the Glenmore Forest with some slight gradients. You can park at one of three starting points on the road from Aviemore to Cairngorm Ski Centre.

The first is the easiest and shortest, the last has the most parking.

Can you swim in the Green Loch?

Many people do swim in the loch, and there are beaches, benches and stone steps where you can just sit and soak up the beauty. Be warned though that if you do take a dip, that there may be leeches in the water, and it is probably colder than it looks. 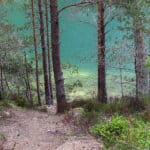